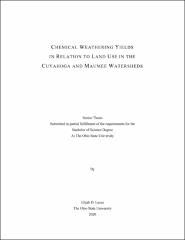 Data obtained from the National Center for Water Quality Research database at Heidelberg University are used to look at two steams, the Maumee River and the Cuyahoga River. Data from a wet year, 2009, and from 2011, a dry year, are used to determine the relationship between river discharge (Q), with the concentration of dissolved silicon (Si), or reactive silicate in both rivers. Log vs log plots show that, except at low discharge rates, both rivers behave chemostastically in that there is little change of dissolved Si concentration with discharge. With data from both years, the silicate chemical weathering yields were calculated for both rivers. Because of the tillage, fertilizer, and tile drainage, it was initially hypothesized, that the agriculturally dominated Maumee would have higher weathering yields that the more natural dominated watershed of the Cuyahoga River. Calculations demonstrated the opposite, with the Cuyahoga yields being 2.76 and 4.79 tons Si/km2/yr and the Maumee being 1.76 and 2.45, for 2009 and 2011, respectively.