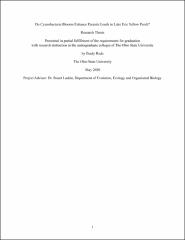 Harmful Algal Blooms composed of cyanobacteria (HABs) are a major concern globally, especially in ecosystems that support commercial and recreational fisheries. Although HABs have been shown to negatively affect the services provided by ecosystems (e.g., safe water for drinking and recreation), their influence on fish populations, and fish health in particular, remains largely unknown. Given that Lake Erie has been experiencing large HABs during the past 15 years and supports important commercial and recreational fisheries, I sought to help Lake Erie agencies understand if HABs are posing a health risk to their valued fish populations. To this end, I explored the relationship between parasite loads in yellow perch (Perca flavescens), which supports Lake Erie’s largest commercial fishery and second largest recreational fishery, and cyanobacteria concentration. Specifically, I tested the hypothesis that parasite loads in the liver of young-of-year yellow perch would increase with increasing cyanobacteria concentration, as cyanotoxins associated with HABs (e.g., microcystin) have been shown to cause liver damage and physiological stress in other fish species. To answer this question, I measured parasite loads in 519 individuals captured from 54 sites across the western basin of Lake Erie during 2011-2019. My results were opposite of my expectations with mean liver parasite loads being negatively correlated with HAB severity. This finding, which was supported by other non-fish studies, suggests that HABs may actually benefit yellow perch by reducing parasite infections. Ultimately, my research points to the need for more research, if fisheries management agencies are truly to understand the net effect of HABs on their valued fishery resources.