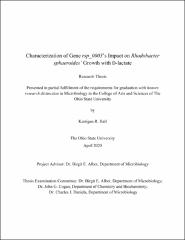 This study was conducted using Rhodobacter sphaeroides, due to its ability to utilize a variety of carbon substrates which are converted to different central carbon intermediates. Among the different carbon substrates are D-lactate and L-lactate, which are proposed to both be converted to pyruvate in central carbon metabolism. Despite this, a transposon mutant (Au18KH24) was isolated that behaved differently when grown with D-lactate and L-lactate. The isolated transposon mutant grew aerobically and phototrophically (or anaerobically in the light) with L-lactate, but had compromised aerobic and phototrophic growth with D-lactate. Interestingly, growth with D-lactate was recovered after a prolonged incubation. The phenotypic suppression may be due to genetic factors or the adaptation of the transposon mutant to the environment within the liquid culture. The transposon insertion for Au18KH24 was mapped to rsp_0003. RSP_0003 is a multi-domain protein, whose initial 150 residues are annotated as belonging to the “Serine Recombinase” family (E-value: 4.59e-19; Accession ID: cd00338). Based on nucleotide spacing between the coding regions, rsp_0003 is likely co-transcribed, along with rsp_0002 and rsp_0004. The location of rsp_0003 suggests that a transposon insertion could impact the other genes located within the gene cluster. The possible polarizing effects on rsp_0002 and rsp_0004 should be taken into consideration, given that the mutant Au18KH24 has yet to be complemented. The overall purpose of this study is to characterize rsp_0003, as well as understand rsp_0003’s role for growth with D-lactate. This will allow us to further understand the differences between D-lactate and L-lactate metabolism.