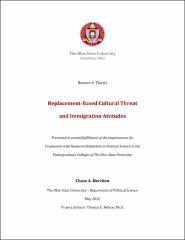 With the influx of nonwhite migrants into white-majority states across the Global North, right-wing political actors have used populism to shape public perception of immigration and immigrants themselves. Warnings against the acceptance of outgroup populations can be traced back to the dawn of human social behavior, though a recent shift in rhetoric by xenophobic actors has taken place. Moving away from claims of impending security, economic or cultural threats of migrant populations, contemporary anti-immigrant rhetoric has shifted toward claims that migrant populations will replace existing western cultures altogether. Through both a survey experiment and an Immigration Threat Measurement Study, this thesis explores the novel replacement threat—a previously overlooked and distinct form of immigration threat. Replacement threat—based in the psychological framing of the impending minority status of a white majority—proves to be an innovative tool for identifying the socio-political consequences of replacement-based rhetoric on immigration attitudes.