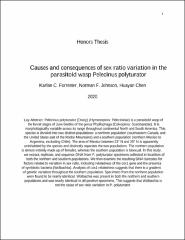 This thesis was originally authored under the name Hannah McKenzie. The author name was updated in November 2022.