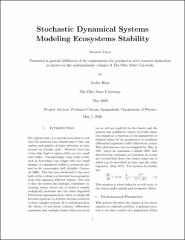 The typical state of a natural ecosystem is such that the variables that characterize it like vegetation and quality of water fluctuate in time around an average value. However there are events that lead to regime shifts on very small time scales. Unsurprisingly, large scale events such as hurricanes can trigger this but small changes of a parameter within a system can also lead to this catastrophic shift (Scheffer, Carpenter 2003). This has been attributed to the proximity of the system to a threshold in a parameter value that separates different regimes. The idea is that the system has multiple, sometimes coexisting, steady states one of which is usually ecologically desirable and the other degraded. Theoretical approaches have relied on simple differential equations to describe the time evolution of these complex systems. It is well-known from the theory of non-linear ordinary differential equations that multiple steady states can occur (as we will see explicitly in this thesis) and the number and qualitative nature of steady states can change as a function of the parameters at isolated values of the parameters in nonlinear differential equations called bifurcation points. Here we explore spatially inhomogeneous setups opposed to the traditional spatially homogenous mean-field model and show large deviations from the expected behavior based on mean-field models and the consequences that these deviations bring.