Toward an Aesthetic of the Post-Industrial Gothic 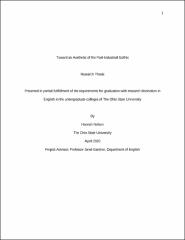