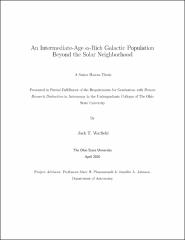 Understanding the chemical history of the Galaxy is essential for developing theories and models for our Galaxy's formation history. I expanded on the results of previous work studying the relationship between chemical composition and age in the Kepler field using a new sample of red giant stars that were observed during NASA's K2 mission. This sample of stars that I used is distributed along 3 different lines of sight and reaches much further into the Galaxy than the Kepler field does. Therefore, analysis of these K2 fields allows us to see whether the composition and age trends that are observed in the solar neighborhood are also true everywhere else. Current theory suggests that the trends in the Kepler field should be true at large, as the composition of the interstellar medium at a given point in the Galaxy's history should primarily be dependent on when Type Ia and core-collapse supernova begin to go off. I selected the targets used in this analysis based on the availability of APOGEE DR16 spectra and of masses derived from the asteroseismic parameters in the K2 Galactic Archaeology Project Data Release 2. To do this analysis, I wrote a program that finds ages for individual stars by interpolating within a grid created from a set of stellar evolutionary tracks that were generated based on theoretical stellar models. This program returns the main sequence lifetime of a star provided its mass and chemical composition. I have been able to recover the age trends that were found for stars in the Kepler field while also showing that, by considering a star's alpha enhancement, this method for finding ages is an improvement over methods used in previous literature as it corrects underestimates of the ages of low-mass stars. When applied to the stars in the K2 fields, I have not recovered this trend, and instead have identified a population of stars rich in alpha elements with intermediate ages (6-9 billion years). The existence of this population is very hard to explain with our current models of Galaxy formation.