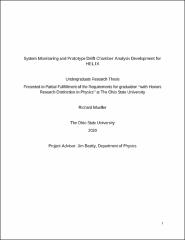 The High-Energy Light Isotope eXperiment (HELIX) was proposed to better constrain today's leading theoretical models of the structure of the universe, to which end it will specifically make high-statistics measurements of the 10Be/9Be isotopic ratio at high energies. Discussed here are the implementation of a monitoring system for several subsystems as well as analysis development for its prototype drift chamber (PDCT). The monitoring system, or housekeeping, was built to weather subsystem glitches, and its software implementation is discussed in detail. This network of sensors and subsystems was successfully tested by collecting over two days of data from HELIX's superconducting magnet subsystem. Analysis routines were applied to PDCT data with the goal of generalizing these tools directly to the soon-to-be-finished tracker. Algorithms were created to isolate cosmic ray muon events, whose drift times were statistically analyzed.