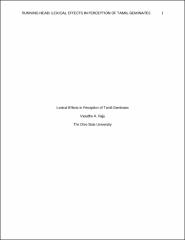 Lexical status effects are a phenomenon in which listeners use their prior lexical knowledge of a language to identify ambiguous speech sounds in a word based on its word or nonword status. This phenomenon has been demonstrated for ambiguous initial English consonants (one example being the Ganong Effect, a phenomenon in which listeners perceive an ambiguous speech sound as a phoneme that would complete a real word rather than a nonsense word) as a supporting factor for top-down lexical processing affecting listeners' subsequent acoustic judgement, but not for ambiguous mid-word consonants in non-English languages. In this experiment, we attempt to look at ambiguous mid-word consonants with Tamil, a South Asian language in order to see if the same top-down lexical effect was applicable outside of English. These Tamil consonants can present as either singletons (single speech sounds) or geminates (doubled speech sounds).We hypothesized that by creating ambiguous stimuli between a geminate word kuppam and a singleton non-word like kubam, participants would be more likely to perceive the ambiguous sound as a phoneme that completes the real word rather than the nonword (in this case, perceiving the ambiguous sound as a /p/ for kuppam instead of kubam). Participants listened to the ambiguous stimuli in two separate sets of continua (kuppam/suppam and nakkam/pakkam) and then indicated which word they heard in a four-alternative forced choice word identification task. Results showed that participants identified the ambiguous sounds as the sound that completed the actual word, but only for one set of continua (kuppam/suppam). These data suggest that there may be strong top-down lexical effects for ambiguous sounds in certain stimuli in Tamil, but not others.