Comparative Political Reactions in Spain from the 1930s to the Present 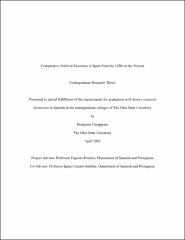 This project analyzes a current right-wing political party in Spain (VOX) and how it has gained support. The thesis examines the political problems that have plagued Spain (Catalonia, ETA) and how the threat of unity has allowed VOX to use this threat to demonize left-wing ideologies. The paper also examines how the memory of the dictatorship was stifled after the transition, allowing for right-wing rhetoric reminiscent of the Franco regime to reemerge.