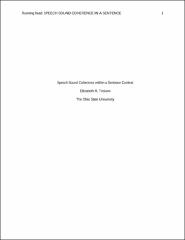 Best et al. (2008) found that selective attention was strengthened over time the longer participants listened to a string of numbers from the same spatial location. The authors claimed that spatial continuity leads to an increase in selective attention over time the longer a person listens to a continuous auditory stream. The reasoning for this is that the auditory features of the object at a specific location remain spatially constant in an otherwise complex auditory scene. As a result of this, the stream would become stronger and easier to organize. This claim of increased stream strength over time was tested using words in the context of sentences by creating an experiment in which /s/ phonemes were spatially separated from words they could potentially attach to in the sentence. I created pairs of sentences, one containing a target word like "start" toward the beginning and the other containing the same word toward the end. The sentences were presented in one of the participants' ears, and the /s/ of the key word was presented in the opposite ear. I instructed participants to repeat the sentences they heard and recorded whether they said the key words with or without the /s/. If participants reported the key words with the /s/, it indicated that the phonemes in the sentence were subject to intrusion from other sounds in the environment. I hypothesized that participants would be less likely to say the key words with the /s/ later in the sentences, because the build-up of a sentence would make it clearer which sounds belonged in the sentence and which did not. However, data analysis suggests that there is no overall difference between voiced responses to early and late target word positions. This means that people might have a baseline level of selective attention that remains unchanged throughout the progression of a spoken sentence.