Beliefs About the Motivational Benefits of Feedback Predict Well-Being 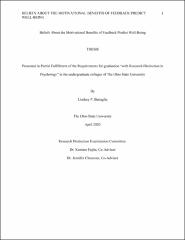