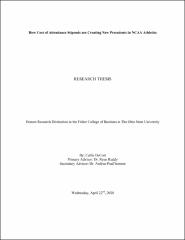 The problem being tested is: How are the new Cost of Attendance (COA) stipends implemented in 2015 affecting spending on women's and men's non-revenue sports? The problem will be explored through data collected on all FBS and FCS Division I schools. The hypothesis will be in the form of an ordinary least squares regression (OLS) with the following general equation format, Equation 1: Outcome=ß0+ß1GiveOutThisYear+ß2AfterCOAImplemented+ß3EverGiveOutCOA+ß4TotalRevenue with the coefficient of interest being β̂1 (GiveOutThisYear). Outcomes of interest include: spending on women's sports, men's non-revenue sports, and men's revenue sports to see if the COA stipend had an effect on spending for women's sports and men's non-revenue sports. Regressions were also run with output: Men's and Women's Operating and Recruiting Expenses to separate out spending expenses into categories to dive deeper into the data. The main conclusion drawn from the research is that it appears as if the money used to pay COA stipends is coming from the men's and women's operating budgets and that the portion coming from the men's budget is proportionately significantly higher than the women's budget, refuting the idea that COA stipends hurt women's sports. The research also showed a preliminary indication that more money is coming from the men's non-revenue sports operating budget than the men's revenue sports operating budget. This study showed how COA stipends are being paid for and the potential negative effect they could have on men's non-revenue sports. This is data that has not before been collected or analyzed. The data can be extrapolated further to delve in deeper into money circulation within NCAA university athletic departments. The research serves as an eye-opener to see where money does and does not seem to be a priority within both athletic departments and schools.