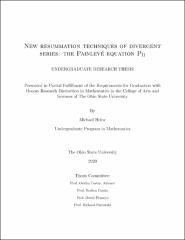 A major goal in the study of ordinary differential equations (ODEs) is to be able to recover maximal information about the solution by resummation of divergent asymptotic series. Most differential equations have asymptotic series which are divergent; for example, in physics, most Hamiltonian perturbation expansions are divergent, only being accurate to a small number of terms. Resummation methods are used to sum divergent series and obtain actual solutions. We are interested in resummation methods that give maximum information about the associated function even when truncating the divergent asymptotic series. One of the most prevalent resummation methods is Borel summation; however, Borel summation is very limited in its applicability to equations. In particular, it always fails along half-lines in which the terms of the divergent series have the same phase, known as Stokes lines. Écalle introduced a variation named Borel-Écalle resummation which removes this limitation. In the last few years, mathematicians have developed efficient improvements of Borel-Écalle resummation which employ the property of resurgence, a remarkable property of divergent series of natural origin which has been recently discovered. One can use this property to deal with incomplete information such as partial perturbation expansions. We have developed such a method, applying it to the Painlevé equation PII (from now on, PII) to test its efficiency and applicability for resumming divergent series. We provide herein a detailed analysis of the numerical accuracy of these different types of approximants for PII. We have increased the accuracy greatly from the usual Borel-Padé approximants of a series used in physics by using asymptotics of continued fractions as well as conformal Padé approximants, a combination of Padé with conformal mappings of the complex plane. Additionally, we observe that conformal Padé approximants converge much faster than the other approximants, making this new method much more efficient in resumming divergent series and dealing with incomplete information. Finally, we provide a preliminary calculation of the binary rational expansion for PII, which is a re-expansion of the function in the Borel plane in attempts to more conveniently calculate the convergent form of the solution. We discuss the behavior of the binary rational expansion through two simple examples. The study of PII is directly connected to random matrix theory in physics. We also hope to apply the method to other problems in mathematics and physics, such as obtaining higher precision in critical expansions at low and high temperatures for problems such as the 3-dimensional Ising model in statistical mechanics.