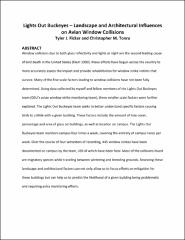 Window collisions due to both glass reflectivity and lights at night are the second leading cause of bird death in the United States (Klem 1990). Many efforts have begun across the country to more accurately assess the impact and provide rehabilitation for window strike victims that survive. Many of the fine scale factors leading to window collisions have not been fully determined. Using data collected by myself and fellow members of the Lights Out Buckeyes team (OSU's avian window strike monitoring team), these smaller scale factors were further explored. The Lights Out Buckeyes team seeks to better understand specific factors causing birds to collide with a given building. These factors include the amount of tree cover, percentage and area of glass on buildings, as well as location on campus. The Lights Out Buckeyes team monitors campus four times a week, covering the entirety of campus twice per week. Over the course of four semesters of recording, 445 window strikes have been documented on campus by the team, 339 of which have been fatal. Most of the collisions found are migratory species while traveling between wintering and breeding grounds. Assessing these landscape and architectural factors can not only allow us to focus efforts on mitigation for these buildings but can help us to predict the likelihood of a given building being problematic and requiring extra monitoring efforts.