"Congratulations, Hitler Will Run Forever!" The Role of the Holocaust in American Jewish Humor 1945-1970 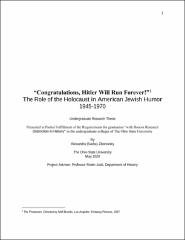 This thesis takes a temporally and thematically concentrated approach to American Jewish humor. In the spirit of the theoretically prevalent relationship between Jewish comedy and oppression, I investigate how the Holocaust, an inarguably catastrophic event in modern history, affected American Jewish humor in the 1950s and 1960s. Many academic works discuss the "Yiddishization" of mid 20th century American humor, commending Sid Caesar and Lenny Bruce for their influential work in Jewish comedy throughout this period. Others, comment on the unique Jewish ubiquity of American humor, as by 1979, Jews made up 80 percent of all professional comedians, even though Jews barely accounted for 3 percent of the total American population. The influence of the Holocaust, however, rarely functions as a primary research lens. Most historians who research the American Jewish experience in the immediate years after the Holocaust do not directly concentrate on the function of comedy. In my effort to synthesize these previously separate concentrations in modern American Jewish history, I offer a chronological approach that explores the comic precedent, immediate aftereffects, radical rebirth, and long-lasting legacy of the Holocaust as a conscious and subconscious stimulus in American Jewish humor. This timetable highlights how the presence of the Holocaust in American Jewish comedy functioned as a veiled and often nonexistent topic, a comic platform for political criticism, and eventually a form of Holocaust memorialization. However, the recent over-saturation of Holocaust humor has enhanced the tragedy's already varying comic symbolism, barring the practice from a common and readily identifiable objective.