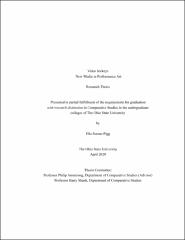 Since the introduction of digitized media into culture, the artistic venture to integrate technology into performance has taken many names. Multimedia performance, interactive media, and digital media design are all novel forms in the lexicon of new media art. The medium of projection arts encapsulates those arts which utilize media projection as a foundational tool. In this thesis, I will investigate a novel projection art: VJing. VJing is a live visual art form that has risen in popularity across music genres. It utilizes a multitude of new media to alter the traditional music performance into an audio-visual synaesthetic experience. First, I analyze VJing by tracing the genealogy of its predecessors, Secondly, I interrogate the underlying critical implications of VJing within the larger context of visual culture. This project does not seek to romanticize the VJ but instead to insert it into scholarly discourse so that we may begin to critically interrogate its existence in contemporary media and performance. By placing the VJ in conversation with different schools of study, such as film, literature, and media studies, I hope to invite and legitimize additional critiques of the artform. Further, this thesis aims to inspire similar studies about projection arts.