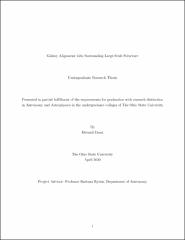 Using a sample of ~400,000 low redshift (0.02 < z < 0.25) spectroscopic galaxies from the Sloan Legacy Survey, I study the alignment of these targets with the distribution of their surrounding galaxies. With the average alignment angle of 45° being a random distribution, the luminous red galaxies show the highest parallel alignment (at a 9σ significance level) on average with their surrounding environment. When looking at the alignment of a luminous red target galaxy with its surrounding structure out to a projected distance rp, the average alignment angle is constant at ~44.3° in the interval 5 Mpc < rp < 30 Mpc. The faint red galaxies have a 4σ parallel alignment for rp > 18 Mpc but no significant alignment for smaller radii. Blue galaxies do not show significant alignment at any value of rp. Alignment for any of the four subsamples shows no dependence on other properties such as the number of surrounding galaxies, or magnitude and direction of the mean position offset of the surrounding galaxies. Future studies of alignment as a function of redshift will help to constrain the interplay between galaxy evolution and the development of large-scale structure.