A Cross-National Analysis of the Gender Pay Gap: National Perceptions and Contradictory Effects on Women's Status 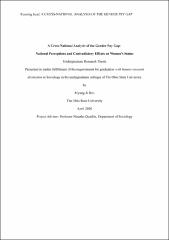 This project analyzed and predicted the economic inequality problem of women with respect to sociological context among four different OECD countries by comparing men's wage and women's wages in terms of their education level, cultural background, and social relation. The index data from the International Social Survey Program (ISSP) was used to analyze the gender pay gap among four typical OECD countries. I used the Ordinary Least Square method to examine what factors have contributed to their wage gaps. First, quantitative approaches to the gender wage gap on the general population and in higher education, showed that higher education mostly lessens the gender pay gap. However, those closing gaps differ by countries, and this research analyzed four states with its perception of success factors, marriage, and professional occupations. It gives an intuitive understanding of the general trend in the gender pay gap among OECD countries and how it relates to their perceptions.