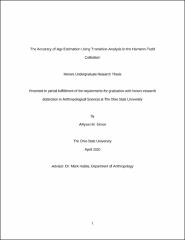 Trying to reconstruct the demographic parameters of past populations using skeletal data is challenging for several reasons. First, skeletal traits are proxy to biological age, which does not always reflect chronological age. Second, different parts of the skeleton age at different rates, making age estimation problematic when based on methods that only incorporate a few anatomical features. A proposed solution to address this limitation is transition analysis (TA), a multifactorial method of age estimation that incorporates information from the pubic symphysis, iliac auricular area, and cranial sutures. However, despite its methodological refinement, TA has been shown to have varying degrees of accuracy when applied to different known-age skeletal samples. This thesis contributes to the discussion about TA's accuracy by estimating the age for 221 individuals from the Hamann-Todd Collection. We contrasted the maximum likelihood estimates generated through TA to the known ages, and analyzed the absolute error for the entire sample, as well as according to sex and ancestry. Estimates show an average absolute error of 11.6 (SD=10.3) years, with white individuals' average absolute errors (14.1 years) being significantly higher than black individuals' (9.1 years; Independent Samples T-Test p<0.001). There are no significant differences in the absolute errors between sexes (males = 11.2; females = 12.1; Independent Samples T-Test p=0.526). A weak to moderate positive correlation was found between known age and absolute error for white males (R2=0.3688; p<0.001), white females (R2=0.2590; p<0.001), and black males (R2=0.1379; p=0.006). The accuracy of transition analysis age estimates varied when each anatomical region was analyzed independently, but the combination of all three anatomical regions yielded the most accurate age estimates. These findings further support that TA accuracy depends on the prior distribution used and that in the case of the Hamann-Todd Collection, the accuracy for white individuals is more influenced by this limitation than when black individuals are analyzed.