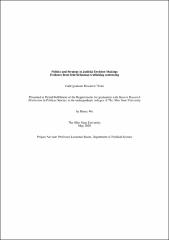 This thesis investigates the effects of judicial ideology and judge characteristics on sentencing in human trafficking cases. Despite research on federal prosecutions of human trafﬁcking, almost nothing is known about sentencing for federal human trafficking offenders. Previous research on sentencing has been limited by the lack of data linking judges to speciﬁc sentencing decisions. Using new data that matches judges to defendants convicted of federal human trafﬁcking offenses, I observe that judicial ideology has an effect on overall sentence length—but only for district court judges appointed by Democratic presidents. I also ﬁnd that partisan composition of the circuit court, rather than ideology of the sentencing judge, affects the likelihood of downward departures from the Sentencing Guidelines. When Democrat-appointed judges make up a majority of the circuit court, district court judges are 2.1 times as likely to depart below the Sentencing Guidelines. These ﬁndings conﬁrm positive political theories of sentencing that model judges as strategic decision makers within a "judicial hierarchy."