Narrative and Freedom: Representing the Lasting Effects of Slavery in Brinch and Douglass 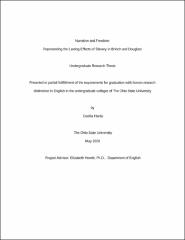 Since its publication in 1810, Boyrereau Brinch's slave narrative, "The Blind African Slave," has been largely forgotten by both scholarship and history. While many reasons have been provided for the text's lasting unpopularity, including its lack of political appeal and depiction of Northern rather than Southern slavery, one explanation that has yet to be explored is the challenging underlying argument of the text itself. Looking at narrative form, this paper reveals and examines the implicit argument that Brinch's text makes about the lasting effect of slavery on the freedom of enslaved and formerly enslaved people in America. The narrator's use of multiple intertextual voices in the first half of the text and depictions of persecution even after emancipation in the second half of the text illuminate the underlying argument that Brinch's autonomy is forever mitigated by his experience being captured in Africa and commodified via the Middle Passage, internment in Barbados, and enslavement in America. This text is then compared to Fredrick Douglass's widely popular 1845 "Narrative of the Life of Frederick Douglass, an American Slave," looking particularly at how Douglass's narrative posits him as more highly autonomous than Brinch through his ability to effectively self-narrate. These texts' very different arguments about the lasting effects of slavery on the freedom and autonomy of formerly enslaved people are then examined in how they impact the popularity of each text and the disturbing legacy of slavery in America.