Purification and Labeling of human MLH1-PMS1 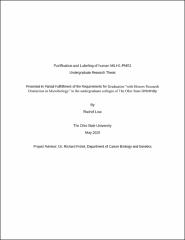 A common mechanism that many species have to repair errors in DNA replication is DNA mismatch repair. Mutations in the proteins involved in this mechanism correspond with an accumulation of mismatched nucleotides. The accumulation of mismatched nucleotides can lead to cancers or DNA instability (3,5). For example, Huntington's Disease, a trinucleotide repeat disease, results after DNA mismatch repair proteins cause trinucleotide repeat-induced DNA instability (5). Furthermore, Lynch syndrome corresponds to a defective mismatch repair system and people who inherit this disease have a higher risk of developing colorectal cancer (3). The two critical proteins in the mismatch repair system are MutS and MutL. MutS searches the DNA for a mismatch, and once a mismatch is recognized, it loads MutL. Once both of these proteins are on the DNA, the mismatch repair can proceed (3). Of the human MutL homologs, MLH1-PMS1 has not been studied comprehensively because it is a much weaker genetic mutator than the other homologs and it does not have the latent endonuclease activity that MLH1-PMS2 has (1). However, evidence suggests that MLH1-PMS1 functions in MSH2-MSH3 mismatch repair. A protocol to purify and label this protein using chromatography and sortase labeling is presented so that the purified protein can be used in single molecule experiments. Further investigation of this protein will likely provide insight on the mismatch repair mechanism, Lynch syndrome, and trinucleotide repeat diseases such as Huntington's disease.