On Quantum (Dis)Entanglement in the Anthropocene: Wondering with a Quantum Mode of Queer Feminist Science Studies as an Exploration of our Current Climatological Moment 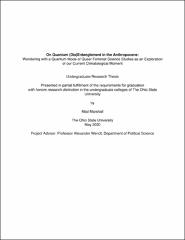 Over the past three centuries, we have witnessed a terrifying escalation of the impact of humans on the global environment/climate. In this current moment, in particular, these climatological impacts are astoundingly evident; to name a few examples of our current state of precarity, we have reached levels of atmospheric carbon dioxide of over 400 parts per million, can expect a global warming of up to 5.8 degrees celsius during this century, and are witnessing biodiversity loss at rates 100 times higher than what they would be without human interference. In response to this unprecedented age of climatological devastation, scientists and theorists alike have come to call this new geological epoch (defined by anthropogenic -- human-caused -- climate change) the Anthropocene. The Anthropocene acts as a powerful illustration of the impact that mainstream western discourses have had on the planet at large. Indeed, theoretically, the anthropocene has ripped a bandage off and revealed the detrimental disposition of our current modes of existence, theorizing, etc. In the wake of such precarity, new methods of understanding, deconstructing, etc. are crucial to reconstructing modes of Becoming within our global ecology. This is where much of our current literature and theory regarding existing in the anthropocene falls just a little bit short; due to the implicit classical foundation of most theory, we have continued to disentangle Human from Nature. In searching for modes of theory, science, etc. that work to actively deconstruct discourses of binary, anti-blackness, capitalism, etc., I have been deeply excited by the vast realm of Queer Feminist Science Studies (QFSS) as a basis for a more entangled, active, and disrupting theory and praxis in our current moment. Part of what makes the notions of QFSS so powerful is its active consideration and de-construction of what science "is" and can be; "a queer feminist science studies must concern itself with the quotidian practices of meaning making that trouble, disrupt, and reconfigure assumptions about nature, difference, species and worldliness" . In the context of QFSS and our current ecological moment, I am, in particular, interested in looking at how the enactment of a queer feminist quantum theory might be a helpful framework for digging into how we have arrived where we are and how to consider modes of resistance, growth, and re-entanglement. It is crucial for me to note that, for the most part, what quantum theory elucidates about inter/intra-action, entanglement, Being/Becoming, community, etc. is not in any way new. Instead, the enactment of quantum theory outside the realm of "traditional" science seems to be powerful in its ability to showcase the sorts of work indigenous peoples, "fringe" academic theorists, grass-roots organizers, etc. have been and continue to do. As a mode of queer, feminist science studies, the enactment of the quantum might be a powerful way to help re-shape and re-center science (and academia more broadly) as more entangled, critical, wholistic -- "to open up the word, concept, and practice of 'science' to new, unexpected, and surprising definitions, inhabitations, and hauntings" . Indeed, to bring together notions of quantum and QFSS is an easy and fruitful sort of connection; in many ways, their notions of existence align, and, as has been noted, these alignments provide a very interesting opportunity to loop current scientific modes into the ways of QFSS. In particular, a queer enactment of quantum (dis)entanglement seems to be a powerful mode of exploration moving "forward" in our current climatological moment. Generally, this paper will work toward two main goals: 1) to explore the practices and discourses that have acted as means of dis-entanglement of human from nature and how this dis-entanglement has put us in the current climatological moment and, 2) to investigate, in both theory and praxis, both current and potential methods/modes of re-entanglement as response to the crisis we find ourselves in.