The Effect of Natural Hair on Stereotype Activation 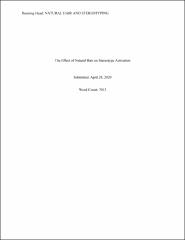 Black women incur social and economic costs for wearing their natural hair. They have been denied employment, expelled from schools and fired from jobs for choosing to wear their natural hair. This research uses the evaluative priming procedure to assess whether Black women who wear natural (versus relaxed) hair elicit greater stereotype activation among White perceivers. Participants briefly viewed photo primes of individuals then categorized adjectives as "good" or "bad" as quickly as possible without compromising accuracy. In Study 1, the race of the photo prime (Black versus White), the hairstyle of the photo prime (natural versus relaxed), and the valence of the adjective (positive versus negative) were manipulated in a within-subjects design. Stronger stereotype activation was indicated by a quicker response time to the adjectives. There was no significant interaction of target race and valence in Study 1. The predicted three-way interaction between race, hairstyle, and valence was also not statistically significant. In Study 2, target facial expression replaced the target race manipulation from Study 1 to determine if a positive social cue could attenuate the effects of natural hair on stereotype activation. The results showed that the interaction between facial expression, hair type, and valence was not statistically significant. However, a significant two-way interaction between facial expression and valence emerged indicating that facial expression did prime response time for adjectives. Future research should focus on identifying how implicit bias can influence prejudiced behavior, to better understand what causes some people to discriminate Black women on the basis of hair.