Stereotypes and Language Attitudes: Examining the Perception of German as "Harsh" 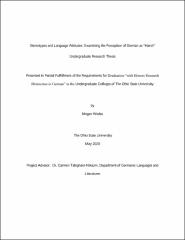 Frequently described as guttural, harsh, or phlegmy, German has often been perceived negatively by native speakers of languages that do not have the same phonetic profile, such as English (Copy Cat Channel, 2013; Cronin, 2013). Indeed, even Charles V, the Holy Roman Emperor from 1519-1566, has been reported as remarking, "I speak Spanish to God, Italian to women, French to men, and German to my horse" (Jenkin, 2014). What does this phenomenon mean for the perception of not only the German language, but for the perception of German speakers and their cultures as a whole? Do preexisting cultural stereotypes of Germans sensitize laypeople to the perception of certain German sounds as "harsh", or does the language itself somehow bring these stereotypes to mind? This study examined these questions using an online survey wherein labeled and unlabeled speech samples of German and Dutch were presented to various groups of respondents for an aesthetic rating either with or without priming of cultural stereotypes. It is hypothesized that participants will rate whatever language is labelled "German" more harshly and negatively aesthetically, no matter if the language was German or Dutch. Participants who rated the labeled language without stereotype prompting were hypothesized to rate the language less harshly. In addition, it was expected that participants would make more neutral judgements about the stereotypes that they were prompted to rate. The final hypothesis is the refutation of the "inherent value hypothesis", or the idea that some languages are inherently more logical, more beautiful, or more suited to certain applications than other languages (Ryan, Giles, & Hewstone, 1988). The final hypothesis is that the unlabeled languages will not generate the same ratings of aesthetic quality or stereotypical beliefs as when the language being spoken is presented in a labeled context. Although the majority of these hypotheses were not supported by the data and that it appears that individual speaker differences made most of the difference in aesthetic and stereotype ratings, some interesting findings did come out of this study. Germans were consistently rated more "German" than Dutch people in every comparison, there do seem to be consistently salient "German" stereotypes, and there is some evidence to support the hypothesis that the label "German" does have some effect on how a language is perceived. This leads to the conclusion that the generation of aesthetic ratings of languages is a complex process that merits further, more in-depth study.