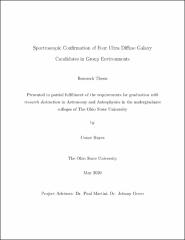 Ultra diffuse galaxies (UDGs) are a type of low surface brightness galaxy that have gar- nered much interest in the astronomical community in recent years in part because their high dark to baryonic matter ratios make them ideal testing grounds for the assumptions of the ΛCDM cosmological framework. Measuring redshifts of these objects is of critical importance because it allows us to understand their physical properties and, through comparisons with established galaxy catalogues, the environments in which they live. In this work, I present redshift measurements for four UDG candidates. Through these measurements, I have determined that these objects exist in group environments. Because the number of UDGs in similar environments with confirmed distances is presently quite small, this represents an important addition to our catalogues of the low surface brightness universe.