The Dragonfly Galaxy III. An Imposter Radio Galaxy in the High Redshift Universe 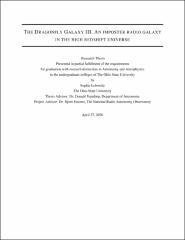 The Dragonfly Galaxy (MRC 0152-209), the most infrared-luminous radio galaxy at redshift z = 2, is a unique system of merging galaxies containing a powerful radio source and large rates of gas displacement. We present sub-kpc resolution data from the Atacama Large Millimeter Array (ALMA) and the Very Large Array (VLA) of the emission of carbon monoxide (6-5), dust, and synchrotron continuum, and combine this with new spectra from the Keck Cosmic Web Imager to study the radio-loud AGN and host galaxy. We find that the Dragonfly Galaxy consists of two galaxies with rotating disks that are 4 kpc apart. Our VLA data suggest that the radio jet brightens when it hits the disk of the secondary galaxy. While the Keck spectra shows the presence of a powerful AGN from rest-frame UV lines, the Dragonfly Galaxy appears to be classified as a powerful radio galaxy as the result of this jet-disk interaction, which boosts the radio flux into the regime of high-z radio galaxies. Despite the high AGN and starburst activity, we do not find evidence for molecular outflows at the location of the radio hot-spot or associated with the secondary galaxy. A potential molecular outflow is seen on larger scales around the radio host galaxy, but overall the bulk of the gas displacement in the Dragonfly Galaxy appears to be driven by gravitational effects of the ongoing merger.