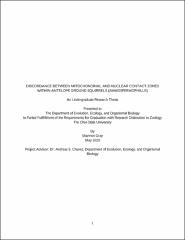 A common biogeographic pattern found in many co-distributed species along the Baja California peninsula is the genetic divergence in the Vizcaíno Desert. This separation is hypothesized to have been caused by a mid-peninsular seaway that formed during the late Miocene-middle Pleistocene and later dried, allowing contact again between formerly isolated populations. Previous phylogeographic studies on the antelope ground squirrel (Ammospermophilus leucurus) show a mitochondrial DNA break through the middle of the peninsula. We investigated whether (1) the mitochondrial pattern of divergence and secondary contact between the northern and southern Ammospermophilus clades are consistent with results from genome-wide nuclear data and (2) whether genetic admixture is occurring. One hundred thirty-three samples were collected spanning from the northwest US south into the Baja California peninsula and pooled using ddRADseq protocol. Our nuclear DNA analyses show a 335 km divergence between the two contact zones and low levels of admixture. Several individuals belonging to the southern clade have a northern mitochondrial haplotype, suggesting introgression. This introgression and lack of admixture suggests that there may have been ancestral hybridization between the now reproductively isolated populations.