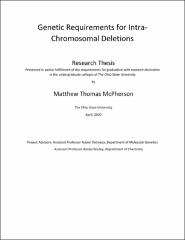 Chromosomal deletions are one of the most dangerous types of DNA damage and often arise as a result of inappropriately repaired DNA double strand breaks (DSB). These breaks are usually formed either in an induced manner from exogenous damage such as radiation, or more commonly caused from spontaneous replication errors. If there is a single strand break during replication and it is not repaired properly, as the replication fork progresses it can lead to the formation of a DSB. When there is a DSB present, there is the opportunity for a chromosomal deletion to occur. If the break is in between non-tandem direct repeats, the DNA repair machinery will degrade what is between the direct repeats through a process called Single Strand Annealing (SSA). This massive loss of DNA is what is known as a chromosomal deletion. Using an assay that in Schizosaccharomyces pombe, we can detect DSBs and determine DNA repair pathways through a selection screen of yeast cells with inactivated DNA repair genes. We generated an in vivo assay that reports exclusively SSA. We validated the assay by showing its dependence on rad52+ and independence rad51+. However, we show that earlier events epistatic to rad52+ and rad51+ have differential requirements for deletions vs. other forms of repair. Here, we delineate a more detailed epistatic pathway for intrachromosomal deletions.