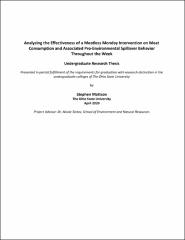 A global reduction in meat consumption has been identified as a critical strategy to mitigate the impacts of climate change, as well as to maintain sustainable land and water systems. Several forms of interventions have promoted reduced meat consumption, with varying success rates. One such strategy is Meatless Monday (MM), a campaign encouraging abstention from meat consumption on Mondays for environmental and health reasons. Little experimental research has been conducted regarding the effectiveness of the campaign, or of meat consumption reduction interventions generally. Another area warranting additional research is that of behavioral spillover, especially as related to pro-environmental behavior (PEB). Behavioral spillover has been defined as the effect of an intervention on subsequent behaviors not targeted by the intervention (e.g., a household recycling intervention motivating increased energy conservation rates). This study addressed such research gaps by testing whether an intervention encouraging participation in MM would lead to significantly reduced meat consumption on Monday and during the rest of a given week, as well as to higher performance rates of other PEBs during that week (i.e., behavioral spillover). We hypothesized that each effect would be observed. The sample consisted of students enrolled in OSU undergraduate courses (n = 111). Participants were randomly assigned into control and experimental groups, and completed a baseline survey assessing meat consumption and PEBs performed, among other variables. The experimental group also received a digital flyer encouraging participation in MM. Both groups then completed food diaries assessing meat consumption for one week, and a follow-up survey assessing PEBs performed and other factors during that week. Subsequent analyses led to all three hypotheses being rejected. In fact, the experimental group reported higher week-level meat consumption, potentially due to failed baseline randomization. Future research is warranted to identify factors that may make meat consumption reduction interventions more effective, and to determine conditions under which pro-environmental behavioral spillover may occur.