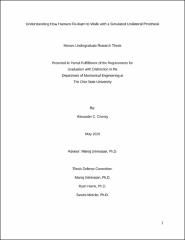 Walking patterns may change due to external reasons such as injuries, disease, and more. Understanding such changes would inform approaches to rehabilitation after such injury or disease. In some situations, such as after an amputation, humans may need to re-learn how to walk with the new prosthetic device. To address these issues, it is important to understand how humans learn to walk and how human walking changes under different conditions. Humans learn to walk at a young age, often at around the age of one year old, and continue to develop their walking patterns until they mature. It is difficult to study these walking patterns due to the young age that walking is leaned by humans. In this study, we recreate the learning process of walking for a short period of time by studying how non-amputee humans wearing the iWALK 2.0 unilateral prosthesis relearn to walk in attempt to characterize ground reaction force magnitudes and body motion variability to evaluate performance and potential improvement. We collected data from ten subjects, after informed consent and International Review Board (IRB) approval. Each subject was equipped with light reflective markers on the abdomen, both the left and right foot, shank and hip. The markers were used to track movements with a Vicon motion capture system. Subjects walked on a treadmill with a left and right force plate to measure the ground reaction forces and torques during each trial. Data was collected from each subject walking without the iWALK 2.0 for roughly three minutes and with the device attached to the right leg for roughly 20 minutes. Results showed, all subjects displayed a symmetric walking pattern in terms of the vertical ground reaction force while not wearing the device. While using the device, all subjects placed more average force on their left leg (leg without the device), while unloading the right leg (with the device). While wearing the device, the free leg endured an average of 60% of the weight. Three out of ten subjects showed a significant increase in symmetry, balance of forces between right and left leg, throughout their time walking with the device, but every subject, other than subject 3, had a higher force symmetry at the end compared to the initial minute of the walking trial. When walking with the device, average stance phases were longer on the left side than the right for all such trials, for all subjects. During the experiment, we collected much more data than could be analyzed within this thesis. The results of this study and further analysis of the data may provide insight into what trends exist in the mechanics and control of walking as these subjects to learn how to re-walk. With a better understanding of how humans learn to walk, improvements can potential be made to assistive walking devices and physical training techniques with the knowledge of humans’ initial approach to a new limb and how they progress over time in a new walking situation. This research also may potentially be used to aid the development of human-like robotics by using walking data to help provide better controller response in robotics, allowing for more “life-like” robotics.