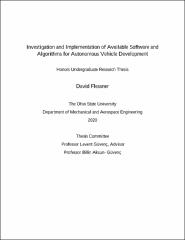 The purpose of this project is to integrate available algorithms for automated driving from open source software into a simulation to demonstrate how the software can be used to quickly prototype control systems for automated vehicles. Autoware is the primary software program that will be tested which processes incoming sensing data for automated driving functions resulting in control inputs for the vehicle such as speed and steering control to respond to the various driving situations. Most of these programs for automated driving research are built based on Robot Operating System (ROS) which is an open source meta-operating system specifically designed to be used for robot software development. Testing of Autoware was completed with ROS visualization simulation tools in addition to a software program called LGSVL Simulator based on the Unity game engine which was used to develop a variety of testing scenarios. Once the software integration was completed, performance of the different algorithms was evaluated using LGSVL simulator and scenarios built in Unity. The primary goal of the project was to uncover the functionality of open source autonomous vehicle software platforms and develop realistic simulation scenarios for the testing of the algorithms.