Dance as an Expression of Faith: Balanchine and Me 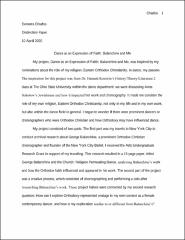 Current research in the dance field is focused largely on the impact of culture and religion on movement. However, as an Orthodox Christian, I became aware that the influence of Orthodoxy on dance was under-researched. To remedy this gap, I traveled to the New York City Public Library to access archival interviews with George Balanchine, the founder of the New York City Ballet, as well as view archival documentation of pieces that he choreographed. Balanchine is typically discussed as an abstract choreographer inspired by music, but I found something never discussed in the critical literature: that he used his stage to emphasize his Orthodox beliefs and even stated that his love for the Church influenced the works that he created. Balanchine’s final ballet near the end of his life, only performed twice, was an onstage depiction of Christ’s triumph over death. Through his final work he wanted to share his faith with his audience, only for it to be disregarded until now. This project culminated in a research paper and a solo that I choreographed for myself, exploring Orthodoxy through movement onstage in my own context as a female contemporary dancer.