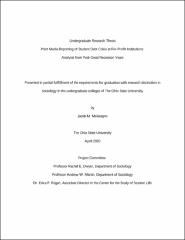 The 21st century has seen an expansion of the higher education system in the United States. Following a rise in college enrollment, the for-profit education system flourished through the 1990s and into the 2000s with flexible programs and promises of high-quality degrees for a post-industrial economy. But as the United States fell into the Great Recession of 2007-2009, questions emerged regarding the true nature of for-profit institutions. Allegations of fraudulent recruiting practices and massive loan payments began to surface amidst print media framing of a burgeoning student debt crisis. In this paper, I attempt to identify media themes associated with for-profit student loan debt using New York Times articles from post-Recession years. I found through coding that themes such as loan default and prey on vulnerable populations were common in post-Recession years as media framing continued to impose a crisis mentality. I conclude that my findings support a crisis framework in the post-Recession higher education sector, fueled by print media reporting of student debt at for-profit institutions.