How Are Illusory Objects Represented in Visual Working Memory? 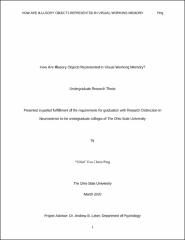 Visual Working Memory (VWM) is an online workspace that holds about 3-4 objects in an active state for a short period of time (Luck & Vogel, 1997). Individual differences in VWM capacity are related to fluid intelligence, problem solving, and other high-aptitude measures, and so are useful for predicting real world behaviors (Cowan et al., 2005; Unsworth, Fukuda, Awh, & Vogel 2014). One way people get around their capacity limitations is by grouping information into integrated units in VWM. Gestalt grouping cues, such as illusory objects, have been shown to improve performance on VWM tasks (Allon, Vixman, & Luria, 2019, Peterson, et al., 2015), but the question of how these improvements arise in the brain remains unanswered. Here, we asked whether the behavioral benefits derived from an illusory object (e.g., a Kanizsa triangle) result from a reduction in demands on VWM capacity. That is, are the objects which comprise the Kanizsa triangle represented in the brain as a single object, as three objects, or as something in between? We recorded EEG while subjects performed a bilateral change-detection task, with memory arrays configured in four conditions: 1 item, 3 items forming a Kanizsa triangle, 3 proximity grouped items, and 3 ungrouped items. We assessed the number of items held in VWM via the contralateral delay activity (CDA), an event-related potential component which represents the number of objects held in VWM. Replicating previous work, we saw a behavioral performance benefit for the Kanizsa triangle condition. However, the CDA amplitude for the Kanizsa condition was not different from either the proximity grouped objects condition or the ungrouped objects condition. This suggests that the behavioral benefits derived from the illusory object Kanizsa triangle are not a result of reduced storage demands in VWM. This may not be the final story, however. Future work will further delineate how illusory objects impact VWM.