Characterizing alcohol use and sexual risk behaviors across gender and HIV status among people attending STI clinics in Lilongwe, Malawi 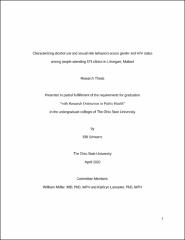 Alcohol consumption and participation in sexual risk behaviors are commonly discussed risk factors for HIV transmission. This thesis characterizes the prevalence of these behaviors among a population of STI clinic patients in Lilongwe, Malawi. Additionally, this thesis examines how these behaviors differ between men and women and patients with positive and negative HIV status. The data used for this thesis were originally collected for a two-armed, randomized cross-sectional study at two STI clinics in Lilongwe, Malawi from June 2015 to April 2019. Alcohol consumption was assessed using the AUDIT-C, a three-question survey that identifies patients who are hazardous drinkers. Sexual risk behaviors examined included condom use during the last sexual encounter and the number of sexual partners in the last six months. Stata version 16 was used to examine the prevalence of these behaviors in the study population. Approximately 85% of participants were HIV-negative, while 15% were HIV-positive. It was more common for women to be HIV-positive than men. Of the HIV-positive population interviewed about their alcohol use, 16% screened positive for hazardous alcohol consumption. Most participants reported to abstain from drinking. But, of those who did drink alcohol, men were found to drink more frequently and heavily than women. Most participants reported not using a condom during their most recent sexual encounter. This did not vary greatly between men, women, HIV positive participants, and HIV negative participants. Men reported having more sexual partners in the past six months than women, but this finding was not associated with a higher risk of HIV infection. Understanding alcohol use and sexual risk behaviors is important as it provides insight into the dynamics involved with HIV transmission among a high-risk group in a country where HIV prevalence is among the highest in the world.