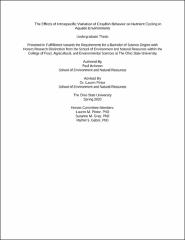 Human activities are rapidly altering species traits at a global scale. Yet, there remains a critical need to determine whether trait variation within species affects ecosystem responses to global change. In particular, intraspecific variation in feeding behavior can have strong effects on ecosystem processes, such as nutrient cycling in streams. Crayfish are dominant consumers in streams and play key roles in controlling important stream dynamics such as nutrient cycling. We hypothesized that within-population, individual variation in crayfish foraging behavior is associated with differences in nutrient excretion. The objectives of this study were to (i) to quantify individual differences in foraging behavior and boldness of crayfish using a giving up density (GUD) approach. (ii) to quantify individual differences in nutrient excretion of crayfish. (iii) to test whether foraging rate, boldness, and excretion rate are repeatable traits in the laboratory setting and (iv) to examine whether there is a relationship between individual variation in foraging rate, boldness, and excretion. These objectives were explored with both behavioral and excretion assays, and general linear and nonlinear mixed models as well as ANOVA tests. We found that behavior and excretion were repeatable and that behavior is associated with ammonium excretion. The finding that crayfish foraging behavior is associated with differences in nutrient excretion has important implications for invasion ecology and nutrient cycling. It is known that behavioral changes occur along with invasion. These behavioral changes can significantly impact the nutrient excretion, and therefore nutrient dynamics within invaded environments.