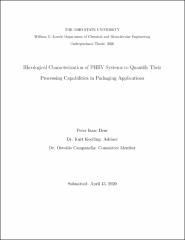 The extensional rheology of PHBV (PURE) and 3 PHBV compounds previously synthesized by Zhao: w/15 wt% natural rubber (15NR), w/NR and 3 PHR peroxide curing system (PEROX), and w/NR+peroxide and 4.2 PHR coagent (COA), previously synthesized by Zhao was characterized using a unique methodology approach to overcome the challenges associated with measuring extensional flow using a lower molecular weight, and consequently lower viscosity material, PHBV (Poly(3-hydroxybutyrate-co-3-hydroxyvalerate)). To overcome temperature control ambiguity, a lumped system analysis was conducted to approximate the sample's temperature based on the oven temperature reading and thermal properties of PHBV retrieved from the literature. To validate the assumptions associated with using a lumped system analysis, the sample's Biot number was calculated and found to be less than 0.1 for all sample thicknesses, satisfying the requirement of having a uniform sample temperature. To present these calculated sample temperatures at the same temperature to allow for meaningful viscosity comparisons, dynamic shear data was collected on the same compounds to obtain shift factors using the WLF equation and the principle of time-temperature superposition. Because only one of the compounds successfully fit the WLF equation to its shifted data, the WLF constants C1and C2 calculated for that compound were used for all the others as an approximation. The transient extensional viscosity data was shifted vertically and horizontally based on these shift factors and compared to transient shear viscosity data to quantify the degree of strain hardening in each compound for each extension rate. At the high stretching rate of 10s-1, the compounds exhibited the expected pattern based on the amount of long chain branching/crosslinks in their structure, with PHBV showing the least followed by 15NR, PEROX, and finally COA showing the most strain hardening. This extensional rheology characterization can be applied to any new compounds of interest in food science and biodegradability to evaluate their potential in applications that would require film blowing or blow molding, such as food packaging.