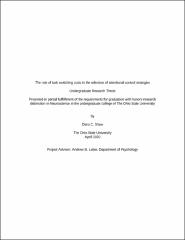 When performing visual search, such as looking for a friend in a crowd, there are many search strategies one can employ. Recent work has shown people often use suboptimal strategies, although there are vast individual differences for such choices. Why might this be so? Here, we considered the impact of updating – i.e., task switching – on attentional strategy choice. In the real world, we rarely perform the same search multiple times in a row; we tend to move from one task to the next. Thus, optimal performance demands we update strategies frequently. Moreover, people vary considerably in task switching abilities. In this experiment we looked at the relationship between task switching performance and visual search strategy. Participants performed the Adaptive Choice Visual Search (ACVS; Irons & Leber, 2018), where they viewed a display of red, blue, and green squares for target digits. A red and a blue target were presented on each trial and participants were free to report either target. The ratio of red to blue squares changed across trials, and the optimal strategy was to look through the smaller color subset. We set run lengths, or the number of trials in a row the optimal target was a particular color, to 1 and 3 for entire blocks. In a separate block of single-target visual search, we measured switch costs (RT on "switch" trials minus RT on "repeat" trials). We hypothesized that switch costs would relate to one's willingness to update strategies and thus predict search optimality – especially at the 1-run blocks. Results revealed no easily discernable relationship between switch costs and optimality. These results show that metrics related to task switching ability may not underlie visual search strategy. We speculate that subjective effort of strategy updating – rather than actual costs of such updating – may determine strategy use.