Toward a Categorification of Biquandle Brackets 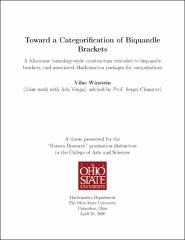