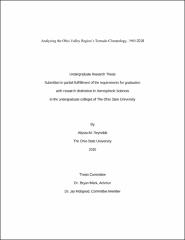 While U.S. tornadoes have been researched intensively by atmospheric scientists and meteorologists, most work has focused on regions like Tornado Alley and Dixie Alley. However, there have been fewer studies focused on the Ohio Valley Region (OVR) that includes Illinois, Indiana, and Ohio. The goals of this research were to create a general tornado climatology of the Ohio Valley region, compare the results to data for the entire United States, and test for changes between inter-comparison normal periods, defined as 1960-1989 and 1990-2018. Data was gathered from the Storm Prediction Center's (SPC) tornado database that contains recordings of all tornadoes from 1950 to the present. For this project, data from two main periods were extracted from the SPC database for analysis: 1960-1989 and 1990-2018. Initially, several different graphs were created using Python scripts to analyze trends in the tornado activity data, including tornado intensities in three different periods (1960-1989, 1990-2006, 2007-2018) and tornado counts in total percentages by month for the two normal periods. Tornado intensities were split into three periods in order to properly analyze the effects of the introduction of the Enhanced Fujita (EF) scale had on rating tornadoes starting in January 2007. In terms of tornado intensity, there have been noticeable shifts in the frequency of weak tornadoes. A net increase of 13 percent was reported in total from 1960 to 2018 of EF/F0 tornadoes across the Ohio Valley. All seasons except for summer saw at least a two percent increase in total tornado occurrences across the OVR. The current peak tornado season in the Ohio Valley matches the rest of Tornado Alley, where the largest number of tornadoes occur from April to June with the majority reported in May. This is a notable difference from 1960-1989 where the peak number of tornadoes were recorded in June. There has also been a recent peak in late season fall (October-November) tornado activity, where 1990-2018 saw 2 percent more tornadoes recorded.