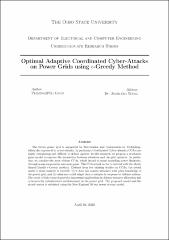 The future power grid is supported by Information and Communication Technology, which also exposes it to cyber-attacks. In particular, Coordinated Cyber-Attacks (CCAs) are highly threatening and difficult to defend against. In this research, we propose a stochastic game model to capture the interaction between attackers and the grid operator. In particular, we consider the most vicious CCAs, which intend to cause cascading power blackouts, through a non-cooperative zero-sum game. The CCA attack vector is derived with the Multi-Armed Bandit epsilon-Greedy method. Distinct from few existing studies on CCAs, the attack model is more realistic in twofold: (i) it does not assume attackers with prior knowledge of the power grid, and (ii) attackers could adapt their strategies in response to defense actions. The result of this research provides important implications in defense resource allocation and cybersecurity infrastructure reinforcement in the power grid. The proposed model and the attack vector is validated using the New England 39 bus power system model.

Except where otherwise noted, this item's license is described as Attribution-NonCommercial 4.0 International