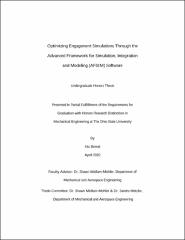 The ability to effectively model and simulate military missions holds the potential to save lives, money, and resources for the United States. The Advanced Framework for Simulation, Integration, and Modeling (AFSIM) software is a tool used to rapidly simulate and model new technologies and mission level scenarios. In this thesis, our objective is to integrate a closed loop optimization routine with AFSIM to identify an effective objective function to assess optimal inputs for engagement scenarios. Given the many factors which impact a mission level engagement, we developed a tool which interfaces with AFSIM to observe the effects from multiple inputs in an engagement scenario. Our tool operates under the assumption that simulation results have met an acceptable convergence threshold. The objective function evaluates the effectiveness and associated cost with a scenario using a genetic algorithm and a particle swarm optimization algorithm. From this, a statistical analysis was performed to assess risk from the distribution of effectiveness and cost at each point. The method allows an optimal set of inputs to be selected for a desired result from the selected engagement scenario.