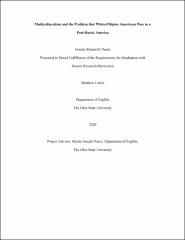 Our American education system encourages us to ignore the history of colonization and cultural oppression that the U.S. has inflicted on the Philippines, which obscures the brutal nature of White-Filipino relations and champions a form of multiculturalism that maintains uneven relationships of power. While this censorship strips Filipino Americans of the knowledge they need to understand their past, it particularly damages White-Filipino Americans who may have trouble navigating between their White and Filipino identities. Brian Ascalon Roley resists this silence by depicting the violent yet intimate relationship between the U.S. and the Philippines in his books "American Son" (2001) and "The Last Mistress of Jose Rizal" (2016). Both books follow the stories of two Filipina sisters, Ika and Dina, and their White-Filipino families as they confront the disparate views of their White and Filipino relatives. My thesis explores the racial tensions within both families and ties these conflicts to histories of violence and uneven power relations that have always framed the White-Filipino relationship. I begin by analyzing "American Son," which follows two White-Filipino brothers who feel little connection to the Filipino American community and to their estranged White ex-military father. Embarrassed by their Filipina mother, Ika—a quiet woman who often expresses shame towards her Filipino identity—the brothers brush off their Filipino identity in favor of other racial identities. This theme continues in "The Last Mistress" as we see Ika's sister, Dina, struggle to keep racial tensions from tearing her family apart as well. In response to negative connotations surrounding their Filipino Identity, Dina's White-Filipino children fluctuate between embracing non-Filipino identities and crafting a 'pure' Filipino identity that ignores histories of violence and colonization. I argue that the behavior of the characters in both books can be attributed to the grossly unequal power relations that continue to characterize the White-Filipino relationship to this day. Because Filipino identity is often associated with powerlessness, Roley's White-Filipino American characters seek creative ways to escape being in this humiliating position, whether it be through embracing other identities or creating idealized versions of what it means to be Filipino. I tie this discussion of power to the current strain of multiculturalism that has led to calls for 'diversity and inclusion' at many U.S. institutions. Our current strain of multiculturalism celebrates racial and ethnic differences without encouraging us to explore the histories of violence and oppression that relate the White identity to the Filipino identity. By bringing the history of U.S. colonization of the Philippines into the spotlight and centering White-Filipino Americans in this discussion, I hope to begin conversations that confront the unequal power dynamics that shape the White-Filipino relationship and how these dynamics have influenced Filipino American identity today. I hope to begin healing old racial wounds by peeling off the bandages of our current multiculturalism and acknowledging that these wounds bleed into the present. I believe that we can heal from the wounds of U.S. colonization, but we must first admit that we are still in pain.