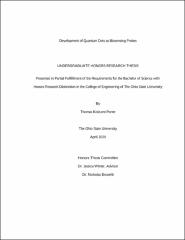 Quantum dots (QDs) are semiconductor nanoparticles that exhibit size-dependent optical properties. Compared to other common fluorophores such as dyes and fluorescent proteins, QDs possess higher photon emission rates. Additionally, they have broad absorption spectra and narrow, size-tunable emission spectra that enable color multiplexing. Their resistance to photobleaching also makes them suitable for tracking over long periods of time. Thus, QDs possess numerous properties that make them attractive for biosensing applications. However, several concerns must be addressed for their widespread implementation in sensing applications. For instance, the most common QDs contain cadmium, raising concerns of toxicity. Additionally, several groups anecdotally report decreases in fluorescence intensity during QD processing. The research described in this document explores several aspects of these difficulties, including a toxicity characterization of QDs made of alternative nontoxic materials with various surface chemistries. Further, a systematic analysis of QD colloidal stability and fluorescence loss during common processing steps such as dilution, centrifugal filtration, and buffer exchange is discussed. After addressing these difficulties, the utility of QDs are demonstrated in a novel magneto-fluorescent detection and separation platform used on protein and DNA analytes. Finally, the development of novel QD-DNA conjugates and the wide-reaching potential applications of these QD-DNA conjugates are discussed.