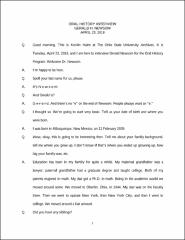 Gerald Newsom discusses his academic career, as well as his administrative roles in both the Department of Astronomy and the College of Mathematics and Physical Sciences. Newsom received his Ph.D. in Astronomy from Harvard University, then he completed a post-doctoral appointment at Imperial College in London. In 1969 Newsom came to Ohio State as an assistant professor of Astronomy, and he eventually retired as a full professor in 2004. In addition to teaching, Newsom discusses his roles as vice chair of the astronomy department and associate dean of the College of Mathematics and Physical Sciences. He also discusses the University’s proposed participation in the mid-1980s in the Columbus Project, an international telescope initiative, and its withdrawal from the project in the early 1990s. Since retirement, Newsom has worked on a project about Richard Byrd’s diary, and he has served in many administrative positions in the OSU Retirees Association. He also has served as a representative for retired faculty in advisory group meetings held by the State Teachers Retirement System.