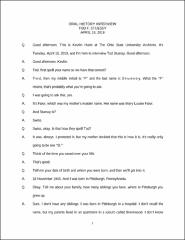 Tod Stuessy discusses his academic career, as well as his administrative roles, in what is now known as the Department of Botany and Plant Pathology. He began his tenure at OSU in 1968 as an assistant professor, and because he felt students learned best while engaged, employed different methods to achieve that goal, most notably dressing up as "guest lecturer" Carl Linnaeus. In 1980, he became the director of the OSU Herbarium, a position he kept for fifteen years. In 1994, Stuessy received the Outstanding Faculty Award from the Office of International Affairs for his work with Chilean botanists at the University of Concepción. The next year, he took an early-retirement package and moved to the West Coast to serve as the director of the Natural History Museum of Los Angeles County. After two years, Stuessy became a professor at the University of Vienna. He retired again in 2012 and returned to Ohio State as a Professor Emeritus. He helped organize a backlog of archival materials collected by Ronald Stuckey, culminating in the dedication of the Ronald L. Stuckey Herbarium Archives in June 2019. Though retired, Dr. Stuessy remains committed to and enthusiastic about his work.