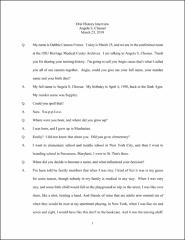 In an interview conducted at the Medical Heritage Center at The Ohio State University, Angela S. Chesser describes her graduate education at Ohio State and her nursing career. Chesser, who knew from a young age that she wanted to be a nurse, earned her degree from Duke University, then worked as a nurse at a drug crisis center in Durham, North Carolina. She decided to return to school for her master’s degree in psychiatric nursing, which she obtained in 1975 from Ohio State. She then worked at several pediatric facilities before returning to Ohio State to earn a doctorate in counseling, which she obtained in 1982. She then worked at Harding Hospital in a number of positions, including her role as assistant director of psychiatry. She retired in 2014 and spends much of her time volunteering, including working with narcotics-addicted babies in the Wexner Medical Center’s neonatal care unit.